Idyllic landscapes and hidden beauties waiting to be discovered during your Porto Heli, Greece holidays! The hidden treasures of the Peloponnese and the cosmopolitan islands of the Saronic Gulf will stay in your heart forever.

Dreamy shorelines with golden sandy beaches and crystal blue waters, scenic, quiet fishing villages and cosmopolitan resorts, rivers with flowing waters and lush vegetation are combined with great monuments and archaeological sites of great global interest. All this and more awaits the visitors of “Moria,” the southern part of continental Greece, widely known as the Peloponnese. Arrange your holidays in the Peloponnese, and explore all its spots of riveting beauty.

The picturesque Porto Heli is located on the southern shores of Argolida, in the Peloponnese, facing Spetses. Various archaeological finds indicate that the main sources of wealth here in antiquity were commerce, agriculture and pottery, while its inhabitants were particularly well off. AKS Porto Heli is built right on the sea, in the bay of Porto Heli, near the sunken ancient city of the Fishermen, the “City of Purple”! Immersed in blue waters, rocky sunsets and a picturesque harbour that embraces boats of all sizes, Porto Heli reveals all its charm in a feast of colours, still remaining one of the most well-known cosmopolitan resorts in Greece today. It is the ideal choice for holidays in the Peloponnese.

Within 20 minutes of Porto Heli by car, between Spetses and Hydra, the town of Ermioni extends over an ancient city of the same name with a great naval tradition. It is believed that Ermioni has been inhabited almost uninterruptedly since at least 3000 BC, as it was built and rebuilt in the exact same place.

The traditional fishing village of Koilada is located about ten kilometres northwest of Porto Heli. Picturesque scenery, traditions, island features and the great naval history of the village make up this distinct setting. Upon arrival in Koilada and just at the entrance of the village are well-known shipyards that continue to construct wooden boats to this day. Following the coastal dirt road leading to the northern side of the bay, you will find the cave of Franchthi, one of the most important in Europe, which is said to have been inhabited by Neanderthal humans.

Spetses and Hydra, the islands of the brave and the freedom fighters, played a key role in the outcome of the Greek Revolution. Spetses is home to the Bouboulina Museum while the mansions of Andreas Miaoulis and Pavlos Kountouriotis can be found on Hydra. Both islands are accessible from Porto Heli by regular tourist boats or katamarans, or from our hotel piers by sea taxi. Apart from their history, you should also discover their beaches and the picturesque alleys with a carriage ride.

During a stay in the Peloponnese, a visit to Epidaurus is a must, especially to the Ancient Theatre of Epidaurus. One of the most important archaeological finds in the area, it was built in the 4th century BC, enchanting its visitors until this day, both with its architecture and its exceptional acoustics; here, sound reaches even the highest seats. Some of the most important events of the Athens & Epidaurus Festival, founded in 1955, are hosted during summer at the Ancient Theater, the stage of which has welcomed some of the greatest music, dance and theatre artists of the international and local scene. Do not miss the opportunity to watch a performance based on an ancient drama.

While staying at AKS Porto Heli, discover the Peloponnese and the kingdom of Agamemnon in Mycenae. The archeological site of Mycenae is considered to be one of the most important monuments in the country, with its Palace being the centre of Mycenaean civilisation. The magnificent Cyclopean Walls that protect the Acropolis of Mycenae, the imposing Lion Gate, the vaulted tombs of the kings and the truly incredible archaeological find of the tomb of King Agamemnon will absolutely impress you.

Visit Nafplio, the first capital of modern day Greece and you will no doubt admire the Fortress of Palamidi that watches over it night and day. Historic squares, neoclassical buildings, Venetian balconies, beautiful old churches and Turkish mosques comprise unique visuals in every corner. It is worth visiting the church of Agios Georgios that is adorned by replicas of art by great Italian painters, and touring the Archaeological, Folklore and War Museums. Be sure to wrap up your excursion with a visit to Bourtzi Castle. 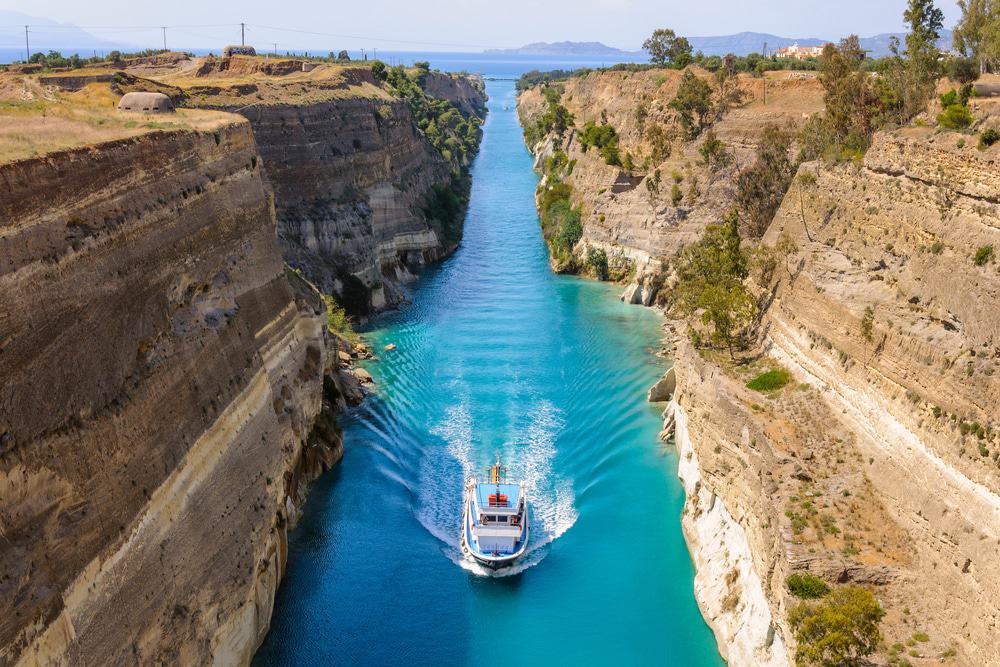 As you head to AKS Porto Heli to enjoy your vacation in the Peloponnese, make a stop at the Corinth Canal to admire one of the most important Greek feats of construction of the 19th century. The Corinth Canal connects the Gulf of Corinth with the Saronic Gulf, and has an impressive length of 6,346 meters. The idea of its implementation dates back to the time of the Second Tyrant of Corinth Periander; due to lack of re-sources and experience, he eventually created the ‘diolkos’, a land route from where the passage of ships was achieved on wheels. In the years that followed, many tried to complete the project, among them Julius Caesar, Caligula, and Nero; however, despite the great efforts of Ioannis Kapodistrias, the Corinth Canal was eventually completed in July 1893. It’s especially impressive to cross this canal by ship.